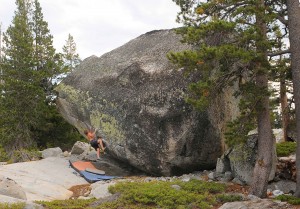 Dave Hatchett on the FA of “Rising Tide” v5 at The Premiums. 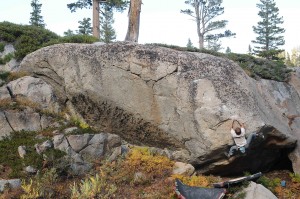 Jesse Bonin wrapping up the season at Lake Azure. 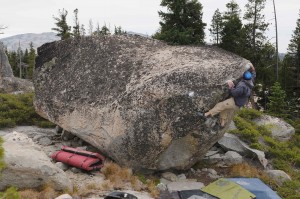 Jesse Bonin on the FA of “General Survey” at The Premiums. 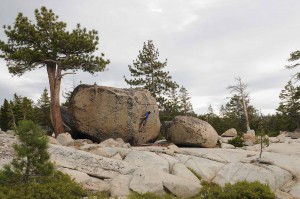 Jimmy Haden on the Glow Block. 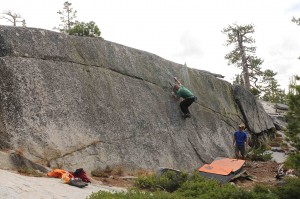 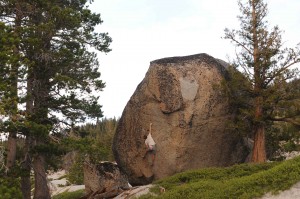 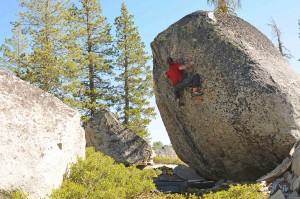 Roman Yalowitz on the FA of “The Tuolumne Shield” v9. 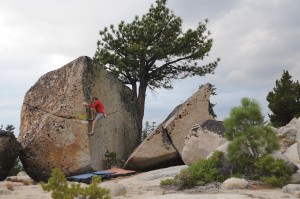 Seth Carter on the Glow Block. 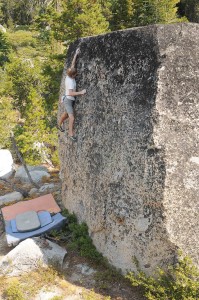 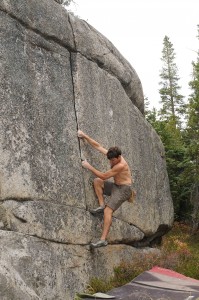 Jimmy Haden on another nice crack line at The Premiums.

HIGHLIGHTS:
The South Lake Tahoe Bouldering Competition was held in Septmeber. Thanks to Chris and Jen Bloch for hosting the event: The results are as follows:

Yet another incredible area has been found right under our noses. Read below for more details.

New Routes:
Thanks to Seth Carter’s V12 Google Earth skills, likely one of the best new areas to be found in a long time got discovered in September. Giving credit where credit is due, we have named this new zone “The Premiums.” What makes it so good? A casual 20 minute approach on a flat trail and some open slabs gets you to the main area. The rock quality is perfect and the whole area has epic views of Desolation Wilderness. The hangout and location are absolutely top notch. It is located on the west side of Lost Corner Mountain, close to the Upper Sugar Pine areas. To find it follow the driving directions to Sugar Pine 3 on the Mckinney Rubicon. A 4wd truck is mandatory! The road is in good shape and there are only a few really rocky sections, just take your time. Don’t park at Sugar Pine 3, continue on the road for about 2 miles, passing Richardson Lake and the parking for Lost Corner Moutain until the PCT intersects the road, park here. Walk south down the PCT for 1o minutes until you see a large, semi blank boulder just off the trail to your right. Continue another 75 yds on The PCT then turn right (SW) and start heading downhill. This section has a few trail markers. After 10 minutes on mainly open slabs you will arrive at the main boulders. N 30 00.573  W 120 13.038.

Some of the highlights at The Premiums are: Rising Tide, an outstanding, long v5 traverse following a triple rail system. On the same boulder “Blood Meridian” climbs a tall v8 face with a heady top out. On the next boulder downhill “State of Matter” v5 climbs a nice arête. 200 yds to the west the “Apple Pipe Boulders” have plenty of classics climbs. A 10 minute walk to the south and you will find the “Glow Block,” which is all time. All in all, Seth Carter, Myself, Dave Schwisow, Mike Hatchett, Jesse Bonin, Jon Thompsom, Jimmy Haden, Dave Baxter and Roman Yalowitz established over 150 new problems. I’m looking foward to getting back out there next summer! There will be a chapter with all the beta in the 2nd edition of the west shore guide.

At Lake Azure some more lines went in just before the season ended. Again, Lake Azure, Snow Lake and possibly some more of Jesse Bonin’s cool finds in Desolation Wilderness will be featured in the 2nd edtion.

Updates:
Sadly, things did not go well for Soda Springs and it will remain closed for the foreseeable future. The owner of the land holding most of the boulders at Soda Springs was on our side. But he was not able to reach an agreement with the HOA, which has a reputation for being less than friendly. Hopefully in the years to come maybe something will work out. I have not lost hope yet and I will keep working on it.

At Split Rock I found one substantial error in the book. “Physics Project Direct” v11 does not exsist. The line as described in the book is actually “Essence of Gonzo” and it’s v8-NOT v11.

At Upper Old County a better trail has been put in to the Red Zone. From The Eyebrow boulder-which has “Father Time,” follow a faint, but marked trail straight uphill to the goods. The trail does not go by the AC Boulder and The Stone That Rolled as it is described in the book. That’s the old trail. Follow the new trail strait uphill and only cut left to the AC Boulder or The Stone That Rolled if you intend on climbing there. Also, The trail around The Cyclops Boulder is still a bit rough and route finding is a little funky in this area.

As I have said in previous posts, I am well under way on the 2nd edition to the NW guide. I have done some nice improvements to the layout, made better overviews, added many new climbs and fixed errors. If anyone has feedback, now is the time. Some grades are being debated, like “Maverick Renagade” and “Lion Heart” both going from v10 to v9. If you have done these climbs and agree or disagree, speak up. In general, changing a route by one grade is trivial and there are many outlying factors effecting grades. But on some of the harder, super classic lines like these it makes sense. And don’t be afraid to upgrade if needed. I have had several people tell me “Sweet & Low” should go back from v6 to v7, which it was originally graded.

I have been finding some errors with the GPS cordinates and I am fixing them. With a few exceptions the errors have been few and only with 1 boulder within a cluster of more boulders with correct cordinates. So if you happen to pick a boulder with improper cordinates, just pick a nearby boulder instead and it will get you in the ballpark and you can sniff it out from there. Again, if you find an error let me know please. Don’t assume I have found all of them! The amount of info in these books is staggering and the more input I get the better and more accuarte they will be. I’m not talking about typos. I’m talking wrong or misleading directions, grades being off, wrong GPS cordinates, etc…..The books are already very accurate and I’m going for perfect on the 2nd round.  Make commets here or email them to: tahoeboulderingguides@gamil.com