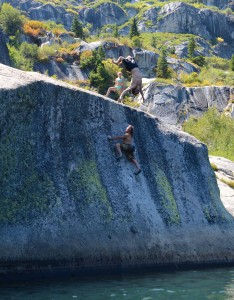 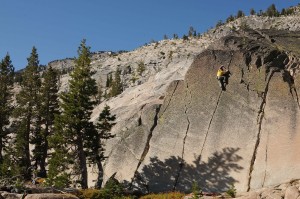 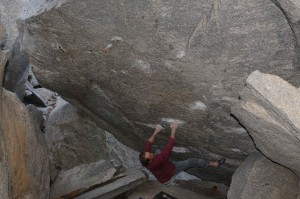 Jesse Bonin on a sick project at Lake Azure. 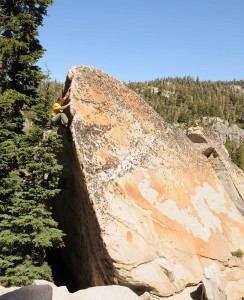 Dave Hatchett on the FA of “Good Obsevartion” v0 at Lake Azure. 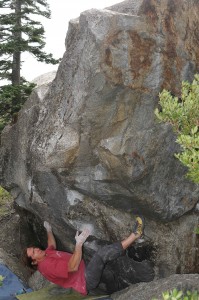 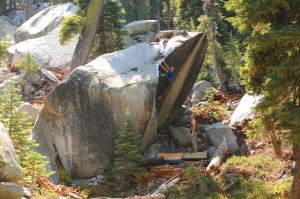 Roman Yalowitz on the FA of “Wlid Child” v7 at Sugar 7. 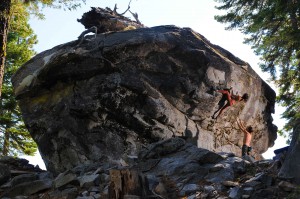 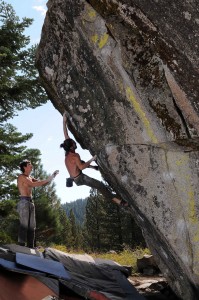 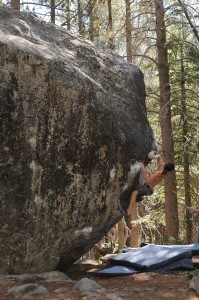 HIGHLIGHTS:
The Tahoe Sports Hub Boulder Bash went down without a hitch. Big thanks to the Sports Hub for putting this on and being and huge supporter of the local outdoor sports scene in Tahoe. Congrats to the climbers on the podium. The results for the comp are as follows:

Speaking of Isaac Caldiero, holy crap the dude won American Ninja Warrior!!! After many, many years of no American Ninja even completeing the course, 2 ninjas completed the course this year. The winner was then decided by whoever had the fastest time on stage 4, which was Isaac. Sooo stoked for him. He was here for 2 weeks during august with his girlfriend Laura Kisana and we had a great time climbing. We went to Lost in Space, The Saddles, Angora Lake, Wooden Cobra, Sugar Pine and Summit Lake. Isaac and Laura sent many classics and were once again impressed with the climbing here in Lake Tahoe.

New Routes:
Jesse Bonin, the mayor of Desolation Wilderness bouldering was quite active at Azure Lake, which is another 20 minutes past Snow Lake, where he and crew put up many sweet lines ealier in the summer. Jesse, Lamberto Franco and Jonah Fahrion sent about 40 problems at Lake Azure South. Then he gave myself, Warren Digness and Dave Schwisow a tour of Lake Azure North, where only 2 lines had been established. By the end of the day we added nearly 20 new lines on the superb stone Desolation is know for. Some of the highlights at Azure North are: “Window Pand & the Snow”-a perfect v6/7 compression line above a forgiving landing. “Go To Your Darkside” v6 is another great compression problem out a cave. “Good Observation” v0 climbs a huge golden arête on a pointy erratic. Also many great highball mods went in on the “Tall Wall,” these climbs are on a nicely scupted slab with some of the climbs reaching 30 feet in height.

At Lost in Space Isaac and I added a few OK lines on the mother ship. On the big, blank section of rock between “Ender’s Game” and “Troubled Waters” you can stack pads to start from a brick pinch. Go straight up at Vo, or traverse right on slopers to a summit jug at v4. Just left of Continental Shelf” is a faint coner, which got done a while back and it’s v6. Left of that on the arête, next to the tree is a fun v3 that starts from crimps and does a few moves. Short, but fun.

At Boreal, on the obvious clean face left, around the corner from “The Ejector” Shelton Gregory added 2 nice v5’s. One is a right to left traverse on a crack, the other climbs direct into it from the left.

Jon Thompsom, Dave Schwisow, Roman Yalowitz and myself added many more lines at Sugar 7. I’m guessing over 150 new climbs so far this summer just at Sugar 7. We still never see anybody at the upper Sugar Pine areas. In fact, I’ve have only seen one climber car in the parking lot all summer. A maroon Tundra-kudos to whoever this was! You can lead a horse to water, but y0u cant make him drink. And just for the record, the Mckinney Rubicon is in the best shape its ever been in and its not that bad. Any 4wd truck can make it. Sugar Pine rules and it’s a ghost town. Have fun at Old County and The Saddles……..

At Lower Big Meadow on Luther pass Jesse Bonin took down a few of the projects. He added the sit start to “Bacchanalia” making it a v10. He also did “The Grifter” on another boulder that had been bouting all takers, and it’s around v10 as well. Also Jay Sell, Brock Berry and crew have been finidng more new boulders. This place is sweet and the approach is mellow.

Updates:
At Lost in Space, Jesse Bonin did a really cool line on the Talus #6 block a long time ago and it never got recorded, my bad. It’s left, around the corner from “The Locksmith” on the downhill face. It’s kinda listed as a project in the book, but the description is not how it actullay goes. This is the real beta: Sit start low on a grey right hand pinch and a left hand crimp. Move out right to 2 diagonal holds then finish up the leaning crack or on the steep arête. Both lines are around v6 and pretty classic and well worth the effort. You want about 3 pads due to the rocky landing. It’s called “Mossy Heart.”

At Soda Springs the land owners are being cool, but the biggest hurdle might be the other land owners that are part of the HOA. Time will tell and we can only hope that the people holding the cards decide to share this incredible resourse.

I’m at starting to get more emails about other climbers finding new boulders. Thank you and keep the info coming, The 2nd editons to the guides are well under way.