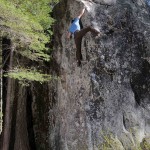 Kyle O’Meara on “Wild at Heart”-v7-Coldstream 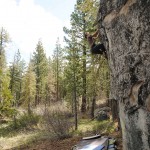 Warren Digness on the “Hobo Bobo.”

HIGHLIGHTS:
Tahoe got a visit from swiss aces Fred and Francois Nicole in ealry May. We took the boys to Middle Bliss, Lost in Space, Sugar Pine 1, Welcome to the Future, PCT, Christmas Valley and Alpine Club. They had a great time repeating many classics and adding a few new lines. Francois took down a thin crimp line on The Beast at Sugar Pine 1 between “Focal Point” and “The Beast.” It’s about v9 and called “European Vacation.” Fred sent “Eminently Climbable” aka “The Frank Nicole Problem” v11 at the PCT Boulders. Several other strong climbers have got on it since, nobody has had success and a bit of mystery surrounds this climb.
New Routes:
Besides what was mentioned above Sugar Pine 1 saw plenty of action and 5 new blocks were climbed on. Most of them are just off the approach trail if you come in from the single track to “The Beast.” One of the best lines was “Davey Boy Special” v5, which climbs a cool, techy arête. Just next to it is another v5/6 arête, a V4 arête and many more problems. In Coldstream Canyon Michael Jonhson found 2 huge boulders about 300 yds SW of the pond that you pass just after you start up the dirt road on the way to the main area. The “Hobo Bobo” is just tall enough to provide a rush and it’s covered in perfect edges. The problems range from V1-v5. The other boulder is a bit taller and most of the problems are legit highballs from V0-V7. Kyle O’Meara added “Wild at Heart” which has v7 moves up high and for that reason it is fairly serious buisness. Dave Fichter came out of retirement and joined Jimmy Haden and I as we worked a cool new line on the backside of this monster block. As he was grabbing a perfect looking sidepull the hold ripped off, bringing with it a huge chunk of rock, about the size of a shoebox. With ninja like skills he managed to push the block away from him in mid air before landging on the pads sideways. He got really lucky and this scared the shit out of us as the hold looked solid and small, not big and loose! A little further up the road from the “Trash Boulder,” in Truckee Warren Digness and Michael Johnson found a block with several lines from V0-v4. It was really dirty and Mike bowed out on the cleaning duties and let Warren and friends have at it. I went and checked it out and I thought it was super fun and provided a good warmup. It’s called the “Trash Can.” Just drive past the trash boulder a little ways until you see a small meadow on your left. The boulder sits on the hillside about 100 yds uphill from the meadow.
Updates:
We spent alot of time confirming grades/info at the PCT Boulders and this is what we have so far:
“Start Your Day” is V2/3-not v4. On the “Rope Swing Boulder” problems 1 & 2 are v1-not v3 and “Thin White Line” v7 does not even go as described and it’s a project. You might be able to climb it at v7 if you do a huge pad stack to the obvious high hold. Let me know if you climb this in any fasion! On the “Highbrow” “1,2,3 & for the Door” is v4/5-not v2. “Shield Arête” is V6-not v5. On the “Skyline Boulder” “Eminetly Climbable” is V11/12-not v9, “Climbable” v7 does not exsist, and “Stratosphere” & “Skyline” have no know repeats and remain a mystery. On the “Y Factor Boulder” “Finger Gripper” is V1-not v4. On the “Z Factor” boulder “Z Factor” v4 does not exsist as described. Maybe it’s a sit start to “Z is Last”? “Lights On” is v7/8-not v4. “Broken Tree” is v1-not v4. “Slip ‘n Slide” is more like v5-not v6 if you have normal to small fingers. But I will admit I’m taking solid v6 on this one with my fat ass fingers. Thats is for now at PCT, we have serveal years before the 2nd edition comes out so any input on grades will be appreciated.