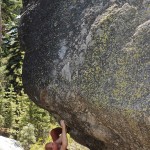 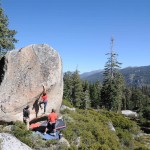 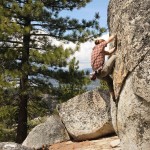 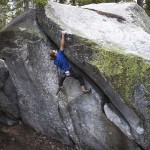 Roman Yalowitz on “Shedding the Right” v5 at Sugar Pine 6 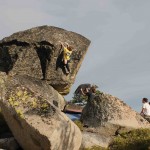 Jesse Bonin has been cruising around Tahoe doing likely the 2nd or 3rd ascents of many harder problems. At Tahoe Mountain he did “Gold Aid Line” V10, noting the descripion in the book might be wrong regarding the top out. He thinks it’s a drop off problem or finish up the wide crack. Sounds like it doesnt finish up the headwall to the right as mentioned in the book. Next up he did “Vagabond” v9. On the north shore he did the “Physics Project” V11 and “Physics Project Direct” V11. Nice work Jesse!

At Benwood Meadows Roman Yalowitz continued his rampage and sent a epic project. Moments after Mike Njoten and Lamberto Franco sent it as well. It’s called “South Shore Hussies” and it’s about v8. The climbs takes the plumb line up the middle of a huge gold face on a nice new boulder 150 yds uphill from the Landshark boulder on your way in to the main Benwood circuit. Just 50 yds uphill from this boulder is another great block with several lines up to v5ish.

At Sugar Pine 3, on The Spaceship, the long standing project low start to “Blastoff” finally got sent by Roman Yalowitz. Its called “Full Blast” and it’s somewhere in the v10/v11 range. You basically start on “Spaceballs” and move up left into “Blastoff” to finish.

At The Beavers some cool link ups and independant lines went in. On the Angry Beavers bolder Ian Cotter-Brown started on “City Boys” and moved left on underclings then up. Its called “Belly of the Beaver” V9. On the frontside of the boulder Ian added “Tickle me Beaver” V9/10 by doing a low sit start from a sloping undercling into “Beaver Cleaver.” Jesse then added “Tickle Monster” V10/11 by start on “Tickle me Beaver” and moving left into “Beaver Fever.” Ian also put a new one on the Fungazoid Boulder by starting on “Fungazoid” and moving right then up-“Mossman Prophicies” V8. The climb I reported on in the February highlights  on the Slug Boulder is called “Uncle Mike’s Arête,” and it seems to be more like V7/8, not V5.

At Round Hill Jesse Bonin, Brad Perry and crew mined up a few good boulders. It’s nearly roadside and the climbs sound fun. There are about 1 dozen problems from V0-v8. Some of the highlights are “Sonic Never” v7, “One Man’s Trash” V8 and “Scoop of Lichen” V2.

At Sugar Pine we went out to Sugar 6 and several nice lines and variations went up. Most notable, Roman Yalowitz upped the bar and did “Realm Eternal” v10 without using the huge foot ledge to the left. He just squeezed his ass up this sick belly, climbing it the way it was originally envisioned. Expect some more good things to happen in this area, it’s a long approach, but damm the rock quality is epic out in these parts.

At Lost in Space a few more blanks got filled in. On the Talus #4 boulder “Bulldozer” v7 climbs the overhang left of “Surfing the Lip.” Grab an obvious hold on the arête, a small crimp and blast for the lip. A few other assorted climbs went in as well.

The owner of “White Lines” and “The Real Deal” at Donner Summit is in the process of granting permenant, but condional access to these boulders. It is with great importance that climbers use the well marked trail through the talus from the roadcut, NOT his driveway to climb here. Also, keep in mind how close his house is. Keep your voices down, don’t play music, if you bring a dog, leash it. If we blow it, we could loose access to these gems.

Almost all the parking spots at Bliss are botched due to road contruction for a least 2 more months. Since they don’t work on weekends its a little better and you might be able to fit a car in here and there. I would go elsewhere.

Joe Missick informed me that Grahm Walters did in fact do the “Moffat Problem” on Split Rock many years ago just after it broke, but from a high start. So at this point, Paul Otis’s send of it mentioned in last months post is the 2nd known ascent after it broke and the first ascent from the low underclings 3 feet up. If anyone has more info, let me know, just for the history books.

At The Clear View Boulders Jesse Bonin sent most of the lines and confirmed what I said in an earlier post, and he did some of the lines we didnt. The sit start to “Horned In” is around V8/9, not V6. The stand is V6. And “House of Cards” is closer to V7, not V5.