Hot and buggy these days. The weather is not the highlight, unless your sitting on the beach.

Jesse Bonin took down another hard one this month by sending the 2nd ascent of “Dead Ant” at Tahoe Mountain. He thinks it’s around v11/12. The problem is fairly obscure and short, but hard for sure.

Lamberto Franco and Noah Napier sent “Eminently Climbable” at PCT boulders, making for the 5th and 6th ascents. I’m curious now about the line to the right, “Stratosphere,” reported to be v9. It has no known 2nd ascent. Looks pretty cool, you just need a lot of pads and maybe a pre inspection on rope just to check the holds. Without chalk, it looks like a bit of a mystery up there. The line to the right of “Stratosphere” is named “Skyline”-v6. It has one known 2nd ascent by Sam Keechler.

At Sugar Pine 7 many more lines went up. We are at over 100 new problems so far this summer at Sugar 7. Sugar 6 and 7 is not for the weary. With a solid approach you have to want it. But this zone likley has some of the best climbing at Sugar Pine. Except for maybe Sugar 1 or 2. Or Maybe 3 and 5……You get the idea. Sugar Pine rocks.

As reported a few posts back, Jay Sell, Billy Potts, Brock Berry, Brandom Ransom and crew developed a cool new zone on Luther Pass. It’s called Lower Big Meadow, or The LBM Boulders for short. Cool new area with over 100 problems up to v8/9ish. To get here park in the Lower Big Meadow parking area on Luther Pass. Walk downhill on The Tahoe Rim Trail for about 100 yds and just past a wooden post with 2 blue arrows on it go right on a very faint, semi marked climbers trail for 5 minutes to the boulders. The boulders all sit near the creek. Pretty obvious to any savvy boulder hunter.

Jesse Bonin, Brad Perry and crew have been busy developing a new area at Snow Lake in Desolation Wilderness. Lots of cool stuff on bullet stone. Like most of the climbing in Desolation, it’s a long hike, but well worth it. More info to follow later this summer.

We didnt do much updating this month. Please keep the emails coming regarding new areas or routes, opinions on grades that seem way off, etc…. 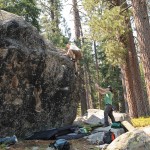 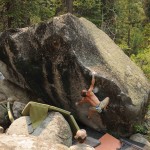 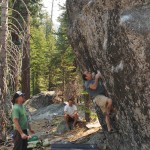 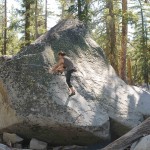 Words and Photos by Dave Hatchett