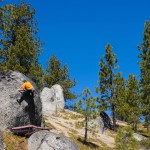 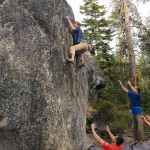 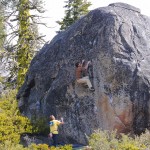 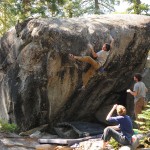 Again on the hard man front some shit got sent. Jesse Bonin nabbed the 4th ascent of “Eminently Climbable”-v11 at the PCT Boulders. Paul Ottis helped solve a long standing mystery by sending the first known post breakage ascent of the “Moffat Problem” on Split Rock. This climb has denied all takers since it broke many years ago, and it was originally rated v8. Paul started standing from low underclings at 3 feet and climbed the problem, skipping the broken gaston that was originally used. And finally Liam Vance may have added what is likley Tahoe’s 3rd v13 by adding a crouch/low start to “Vaporized” at South Bliss. His start only adds a few moves, but they are brutal. The other two V13’s are Charlie Barrett’s “Wicks Sit” on the Saddle Boulder and Jesse Bonin’s “Endless Basement” at The Freaks.

Next up, it should come as no surprise that the weather was mega in March and a huge amount of new development went down. See the info below.

New Routes:
So much new stuff go put up in March I hardly know where to begin. At Lost in Space the Jesse Bonin got the ball rolling by putting up a great problem on the cool boulder sitting by the river on the way in to the main circuit. This boulder got neglected for far to long. Jesse’s problem “Wide Angle Friends” v9 starts from a sit/crouch and climbs unique moves on cool features near the NW arête. Soon after Roman Yalowitz added 2 more lines just to the left, “Pecan Pie” v9 and “La Baroud” V9.

On the south shore rumor has it that Jay Sell is on to a few more new zones. Details are scetchy now and I hope to have some more solid info soon. But I can tell you for sure the rumors are true and brand new spots are getting developed.

In Incline Village, while riding Diamond Peak a month ago I saw some boulders from the chairlift that looked promising. I hiked to them and they proved to be as good or better than I had hoped. I put up about 20 problems so far on 6 different boulders up to V7. The climbing is mainly on slabs, seams and arêtes. When it’s all filled in there should be about 40 problems on 12-15 boulders. The spot bakes in the sun and it’s a good winter/fall area and the approach is a steep, but mellow 15 minutes. It’s very similar to “Cloud 9” and the “Viewpoint Boulders” in the SE Edition of “Bouldering Lake Tahoe.” It’s going to be a fun zone for easy to moderate climbing on smaller sized boulders with sandy landings.

I have been hard at work with Dave Schwisow and Kevin Jones improving the layout, fixing errors and drawing better overview maps for the 2nd edition of the NW guide. And of course, keeping track of the hundreds and hundreds of new climbs. Finally, the printer is calling out June 15th for the delivery date of  “Bouldering Lake Tahoe” Outlying Areas Edtion. Just in time for your summer assault on Erratica, The Platinum Boulders, Lego Land, Bear Valley, The Sierra Buttes and sooooo much more. Scrub, climb, explore, eat, sleep, repeat.

Words and Photos by Dave Hatchett