HIGHLIGHTS:
“Bouldering Lake Tahoe-Outlying Areas Edition” is here and copies will be making thier way to a shop near you very soon.

Seth Carter sent the long standing project “The Anti Queen.” The climb starts on head high patina edges and climbs into a dihedral to finish. The climb denied all takers up to this point and this is a very proud send by Seth. He seems to be sticking with the name “The Anti Queen” and it’s around V10. It will be interesting to see how others climbers do on this stellar problem now that it’s been done. This problem reminds me a little bit of “Crown Jewel,” just a little less bad ass. But it’s an incredible feature up a huge face and it’s very aesthetic. A lower start from double underclings remains undone and will likely add  a few grades. It may be a bit of a star destroyer, that will remain up to the climber to decide.

New Routes:
The very early spring allowed access to Sugar 7, a zone we have been waiting all winter to hit. It’s 20 minutes past Sugar 6, making for a 4.5 mile, 2 hour approach. It’s way out there, but once you are there you will forget all about the hike. Loads of perfect granite blocks are tightly grouped in a beautiful setting in the backcountry. Some of the hightlights so far are “Ancient Wisdom” v4 which climbs a faint corner marked by a thin white dike and perfect grips. “Genesis” is another fun, tricky v4 arête. “Samarai Style” v4 climbs a tricky thin dike and “Camarillo Brillo” v7 starts high on OK holds, busts a hand foot match on the lip of an overhang and finishes with a height dependant v4 mantle. We have about 40 problems so far and as far as rock quality it just doesnt get much better.

At Diamond Peak, above the ski resort in Incline Village, another enitre ridgeline covered in boulders got developed. Newcomer Adam Wernham got the ball rolling up there with friends Niko Georghiou and Kevin Swanson. Then myself, my brother Mike, Roman, Seth and Kevin Jones joined the party. Many sweet lines went in, with about 50 problems so far from Vb to V6. The views here are great and the climbing is worthy.

Also at Diamond Peak, on the adjacent ridgeline mentioned a few posts back, more lines went in, including a few harder ones. Roman added “Michighan Noiseless” v9, the hardest line to date up here. Another good one, “Fully Stocked Fridge” v5 went up as well. We pushed up the hill 10 minutes above the first cluster and you guessed it, more boulders. Just scratched the surface up here with about 10 problems and left alot untouched.

Several other lines got mapped on The Anti Queen Boulder. We were not sure exactly what had been done and what had not, in any event they are cleaned and on the map now. Seth did two V9 crimps problems on the backside of the boulder that go over a small roof. I did a fun v4 arête to the right of “The Anti Queen” that has a crux start and an easy, tall finish. Most of the problems were filthy and felt unclimbed, but you just can’t tell sometimes. Everyone I talked to about this boulder said they didnt do much on this monster block.

Updates:
At Burnside Lake on the Lost & Found boulder, Roman Yalowitz did problem #11, listed as a project. We think it’s the FA, and it’s about v7.

At Split Rock by Donner Lake I wanted to mention one route that is not in the guide to avoid confusion. Some climbers have been having trouble identifying the lines. If you start on Physics Project and exit early and right up the corner it’s called “Essence of Gonzo” and it’s v8. “Physics Project Direct” takes a more left exit.

A private property issue has came on the radar. At Pot of Gold, The Icebergs now have no tresspassing signs around them. The parcel is huge and remote and is currently being logged by the owners. They are asking peolple not to climb here. Enter at your own risk…The good news is that the majority of the climbing at Pot of Gold, including everything but The Icebergs seems to be ok for now. 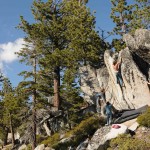 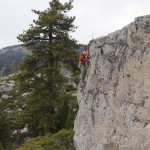 Dave Hatchett on a cool v4 arête on The Anti Queen boulder. 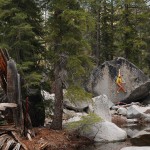 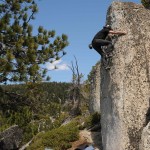 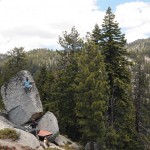 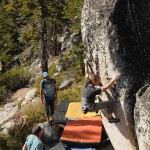 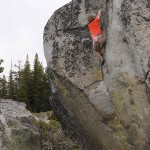 Seth Carter succeeds where so many have failed. FA of “The Anti-Queen” v10 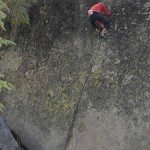