HIGHLIGHTS:
“Bouldering Lake Tahoe-Outlying Areas Edition” is officially done and off to the printer. Copies should be available in June sometime.

Yet another very dry month provided numerous perfect climbing days and some good first ascents got done. If this keeps up winter is going to be the new “season” in Tahoe.

New Routes:
In the begining of the month Warren Digness, Dave Schwisow, Dave Baxer and I went to this cool boulder I’ve had my eye on for years. It sits majestically on the shoreline of Emerald Bay and it’s only accesable in low water. I wasnt sure if the problems were going to pan out and I questioned if the boulder had enough good features to make fun climbs. To my surprise we put up 11 great lines from vb-v7. They include some juggy warm ups, Two cool v3/4 crimp problems and two v3 arêtes. I came back the next day with Dave Griffith and we did two harder lines. “Siren Song” v6 starts in a seam and does a big move to a hard to find edge and Dgriff pulled off a testy slab on razor edges at v7.

At The Beavers Lamberto Franco, Roman Yalowitz and Noah Napier found a new face problem on the backside of the Slug boulder. They worked it for several hours until Mike Njoten cruised up, pissed on it second try and called it v5. I guess the boys were botching the beta, because v5 is usually is a warm up for these guys. Just goes to show you that grades dont mean much somtimes….

At Lake Audrain many new lines were added, including brand new problems and substansial sit starts. The development was done mainly by Jon Thompson and Roman Yalowitz. Clay Joesephy added some lines as well. For starters two brand new blocks were opened up about 300 yds before the main circuit on the right side of the road. Clay added a couple fun warm ups to the area on one boulder while Roman put up “The Arborist” v4 on a neighboring block. Look for more detailed approach directions in the coming second edition. On the Paul Bunyan boulder a link up was opened by connecting “Babe” into “Paul Bunyan” at about V5. In between  “Paul Bunyan” and “Blue Ox” a fun slab got done, it’s called “Bird Gets the Worm” v3. Nearby on the Chainsaw Boulder on the face facing Paul Bunyan, start on an undercling/rail and climb the easy slab at about v2. On the same boulder a fairly hard v6 sit start got added to “Logjam.” Start matched on a left facing sidepull and climb into the v4 stand via some amazing movment. On the Superman Boulder, to the right of “Superman” sit start with your left hand on the right hand starting grip for “Superman”.  Head up right to a jug and a mantle. This is “Clark Kent” and goes at about v6ish. Then on the back side a cool addition called “Lois Lane” v3ish went up. Sit start on a perfect sloper rail, bust a move to the protruding ball hold on the lip and mantle. Finally on the mega Big Sloper Boulder a sit start was added to “Big Sloper” at about v6. And just next door another sit start was added onto the mega classy “Flake Audrain” at about v7. A brand new line on the left arete of the block went down as well and is 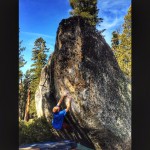 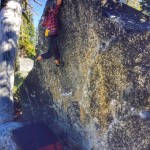 Roman Yalowitz on the Yardbird Arête v5 at Lake Audrain. 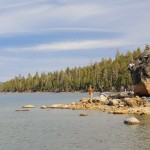 super sporty at the finish. “Yardbird Arete” from Roman Yalowitz climbs a slopey arete to gain a set of crimps about 15 ft up. From there you dyno out right up to a sloper at the apex of the block at around v5 or so.

Updates:
I spent some time with Damion Estrada and Roman Yalowitz checking grades and info at the Clear View Boulders near Tahoe Mountain Road. This section in the guide was fairly close, but needed a few major corrections. On the House of Cards Boulder: “Tombstony” does not go at v5 as it described. It’s a v4 jumpstart to the good hold. The static start is a project and likely at least v9. “Bottom of the Deck” starts higher on the horizontal, not like the description and some unique padding skills are needed to make it fairly safe. “House of Cards” remains unclear because we couldnt do it, it’s for sure not v5, likely v8 or so and not that cool anyways. On the Clear View Boulders: “Clear View Crack” is v1, not v3 and would not get 4 stars ever, regardless of the landing. “Horned In” is more like v9 from the sit, not v6 like it’s rated. The stand is around v6. Thats the meat of the corrections, I tuned up many of the descriptions which will be in the 2nd edition of the SE guide.